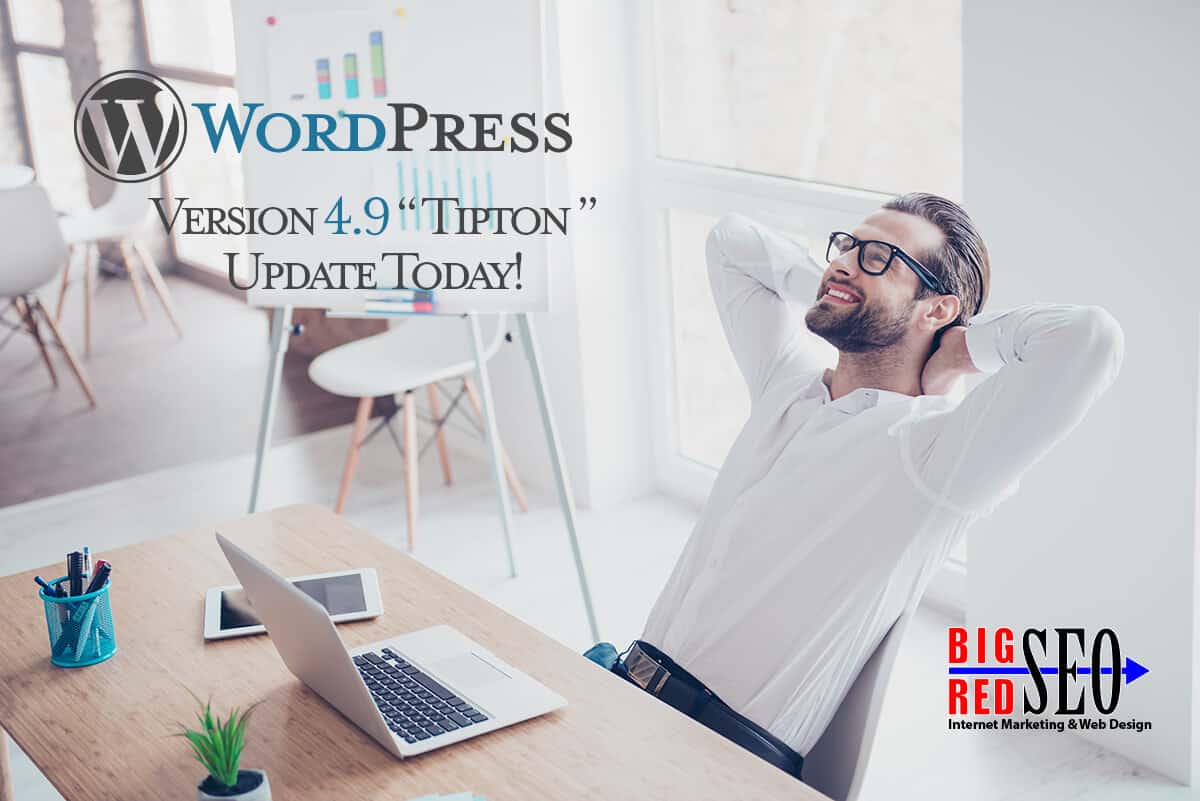 WordPress 4.9, named”Tipton”, was released on November 16, 2017 and is the second major version update this year with WordPress 4.8 previously released in June 2017.

Upgrading to 4.9 is a manual process and is not an automatic update! If you wish to make the update yourself, you should make a backup of your website. There is no rollback feature! Once you’ve generated a backup and downloaded it for safe keeping, click the Update Button and go through the website to verify that everything is working correctly and there are no conflicts with plugins, site functionality, etc.  Please make a backup of your files and your database!

Any time there’s a Major Version change (4.7 to 4.8, 4.8 to 4.9 and then 4.9 to 5.0) there’s bound to be problems that people run into.  Minor updates or subversion updates generally go a little smoother, but when we get into these major updates, usually there’s a rewrite of code somewhere that destroys plugins or custom code that previously worked.

From what we can see, there have been some major updates to the design end of things in WordPress. They’re really targeting their lost client base of users who swapped to Website Builder Packages/Services (ex: Wix, Squarespace, Weebly, etc). The WordPress 4.9 versions new features really targets designers and those that are writing code on the site, and place a heavy emphasis on the “Customizer” portion of WordPress.

Preview Themes In The Customizer

Looking to test out a new theme? Now you can! Simply install the theme, then click the “Live Preview” and you can see just how much work is ahead of you before going live.

As awesome as this is, we still strongly advise people to use a development site rather than testing things in your live environment! Remember, it takes a prospect less than 30 seconds to decide if they want to do business with you based on your website, so make sure you only show the finished product!

Now here’s a cool new feature we’re excited about! You can now build out tweaks to your theme, load it up on to your website, and then schedule a time and date for the new design to take effect.  This is pretty slick!  An example of a swap might be changing colors or image layouts etc for a particular holiday effect (Black Friday, Christmas, Easter, Memorial Weekend, etc).  Or, if you’re developing a website and you have a certain date that you want to go live, you can now schedule it. Anything you would do in the customizer can be saved as a draft and then scheduled.

You can also forward a link (to anyone) to show them what the new design will look like before actually launching. This is great for in-house testing or getting opinions from members etc.

This was part of JetPack in the past, but it’s now a core function in WordPress.  Just like dragging and dropping a text widget, or other another widget on your screen, there’s a new one called Gallery Widget. This does exactly as you think – it displays a gallery of images.

It’s not going to be a replacement for any of your normal Gallery Plugins like NextGen Gallery etc, but it’s a nice clean version of a simple gallery.

One awesome new additional feature is the ability to embed Audio and Video. No longer do you need a separate widget to include Vimeo or YouTube, you can now add them directly inside this area.

In a recent release, WordPress made is to that the Text Widget has it’s own Visual & Text displays allowing you to enter text, add bold, italics or bullet points just like a normal text section on your website. This was a big step forward, as previously you had to enter items in HTML here.

The new addition is the “Add Media” button, which now allows you to add images directly to the text area. You can now dump the Image Widget Plugin and use the native commands right in WordPress.

In addition to that, you can now use Short Code directly in the Text Widget too.  They also allow oEmbed support to add videos etc in the widgets too. So now any source that supports oEmbed can be added in here.  If you upload something to Facebook, you can now play it directly on your website! This is awesome!

This is a big one for designers and those that like to play with code (even on a live site, which we strongly advise against!).  With the addition of CodeMirror, which allows Syntax Highlighting, Live Error Checking and AutoComplete, writing code just got a little easier! This is now active by default on the customizer the HTML Widget, and the Editor screen if editing CSS or Plugin code.

As an extra bonus, it also validates the code to ensure that you haven’t made an error and end up breaking your website, or showing just a white screen! This is critical to those that are unfamiliar with the code as it’s almost like a safety check to ensure you don’t break the site!

The release of WordPress 4.9 should be the last big release before WordPress 5.0 and the introduction of the Gutenberg editor which promises to change the entire flow of WordPress. The editor takes direct aim at other website builders like Wix and Square Space, and in some measures, it’ll also take on any of the WordPress Theme Builders that utilize Block Editing style.

Page Builders that come to mind are WP Bakery, Beaver Builder, Divi, and Site Origin.  While there’s nothing written in stone yet, this appears to be the direction that the Gutenberg update is headed.  It’s still slated for early 2018, so lots of things can change!

Will it be the last update before Gutenberg is added to the WordPress Core? Will the community rebel against WordPress team and encourage Gutenberg NOT to be included? Will Wix buy WordPress in 2018? (I hope not!).

These questions and more will be answered over the coming weeks I’m sure.

Security Updates and WordPress 4.9 – Get Ready!

There are no known security issues reported as of yet for WordPress 4.9, but it’s also only been 24 hours! There most likely will be some sort of updates on the WordPress 4.9 branch, so make sure that your website is up to date with the latest version.

If you would prefer not to think about WordPress updates, plugin conflicts and resolution of conflicts, we have a maintenance program that can assist with all of this! Just contact us via our Contact Big Red SEO Form, and we’ll be happy to explain the program and fees.

Check Out These Other Articles
The Search for the Perfect Blog Post Length, Part 2

At Big Red SEO, our search engine optimization team and content creation experts spend a lot of our time coming up with individualized strategies to earn your business higher rankings in Google and other search engines. We know that every business is different, with different goals and different ideal audiences they want to attract. That’s why we’re so interested in having conversations with you about how to optimize your website’s content to make your company’s SEO marketing more effective. Some people say that shorter blog posts are the way to go, while others put their money on long-form content to draw more

When a customer comes to us to buy web hosting services, the first thing we ask is, “Would you like a dedicated or shared server?” Our next follow-up question is, “Do you want managed services?” Many business owners take the chance and veto the managed services. They see it as an unwanted cost and we often hear comments such as, “I can just deal with that problem if it happens.” As a business owner, it scares me to hear someone say that because with an e-commerce site it is extremely important that I protect my customer information like contact information and billing information and make sure that