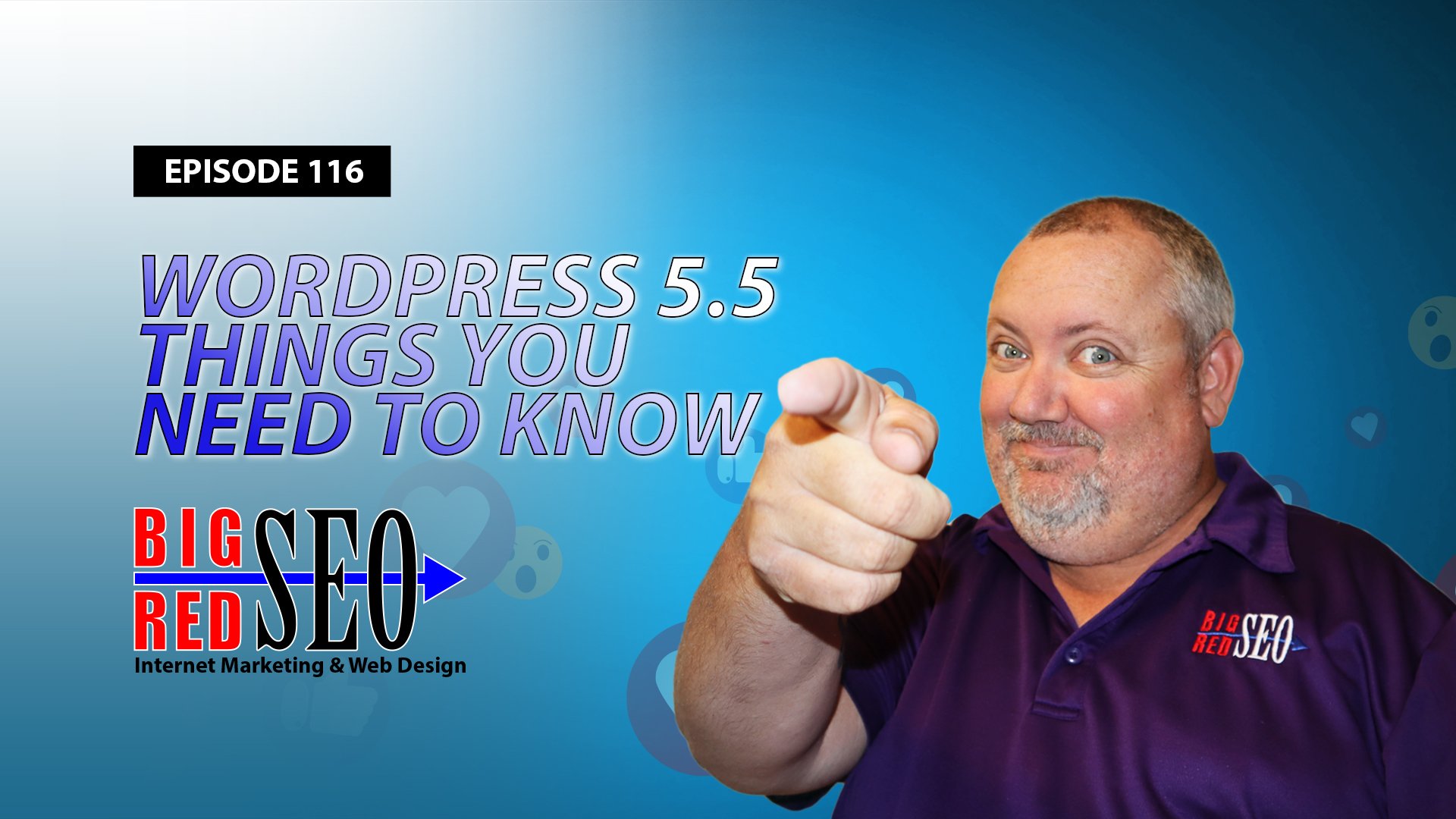 WordPress 5.5 was released earlier this week, and boy did it pack a punch! There are a bunch of new features from Lazy Loading to Image Editing, and a whole revamp to the Gutenberg Block Editor system too.

Not everything came up roses however, we had a couple of notices that we saw when updating client’s websites, and of course when we reviewed the WordPress Release Notes and various forums.

While we saw issues, we also have a fix and it revolves around the jQuery Migrate which was removed from the new version of WordPress. So if you have problems with your header navigation, sliders or other items using jQuery, it could be the jQuery Migrate causing problems and you will need to install a new plugin to handle it (search for jQuery Migrate Helper) in the WordPress plugin directory.

Now sit back, relax, and check out the video as Conor reviews the various areas of improvements and changes in WordPress (there’s even video walk-through of the new Blocks Editor!)

Some WordPress 5.5 Features That Stood Out

(01:15) – The WordPress team removed a lot of old code that was still be shipped in WordPress to handle older browsers. Specifically Internet Explorer versions 6-9.  We think they should have also removed code for IE10 too. Microsoft stopped support of Internet Explorer 10 in 2016.

(03:50) – There’s a whole new rework for interface items, and a bunch of icons were recreated along with a few new ones. This was all part of the redesign for the Updated Gutenberg Block Editor.

(09:15) – WordPress updated their documentation and also references to variables in their code that use the terms “whitelist”, “blacklist” and “webmaster”.  Now those terms will be referred to as “previously approved”, “disallowed” and “site admin”.

(12:30) – Nearly all the issues that we saw in WordPress surround the jQuery Migrate reference in code. Essentially jQuery Migrate was a patch released in 2013 to allow programmers to reference older code in version 1.8 which was removed in version 1.9. It amazes us that developers are still making plugins and themes referencing older, outdated code. But that’s the web. Sometimes you just never know until it’s too late!

(16:00) – A number of plugins and themes have already updated their code. As of this post some of the main ones that we saw release new updates are; WooCommerce, Avada, Enfold, and TI Wishlist.

(17:05) – If you are still having issues, you can install a plugin from the WordPress Plugin Directory called “jQuery Migrate Helper”. This will allow you to re-add the javascript file that was removed by WordPress in version 5.5.  Please consider this a patch and not a final solution. You should contact your developer, theme makers or plugin creators and encourage them to remove the old references to jQuery Migrate and use the latest version of jQuery.  WordPress will only be continuing their focus on jQuery as we move into WordPress 5.6 and WordPress 5.7.

As another solution you can always rollback the version of WordPress to 5.4.

(19:00) – Here’s a quick demo of how the new Block Editor looks and functions. They have completely revamped the User Interface for how the blocks operate, and now grouping sections is a lot easier too.

(22:35) – New Feature: Block Patterns. I don’t know why WordPress didn’t just call them templates! You can now group sections or blocks together and then save them as a Pattern which you can use later in your website.

(25:45) – New feature: Automatic Plugin & Theme Updates.  This is something that we personally have a love/hate relationship with. In this quick demo, Conor walks through how to enable automatic updates on individual plugins or themes. It’s nice that it’s not an “all or nothing” feature. The concern however is that the automated plugin updates doesn’t do enough verification to make sure that the plugin update doesn’t break things. It does do a check to see if the plugin is compatible with the new WordPress version and the PHP version based on the information the developer may have listed, however it can’t do more than check numbers.  As a result, caution should always be used when enabling automated updates.

(27:45) – Declaring Environments – This part is more for web hosts than web designers. WordPress added code that allows a plugin or theme to act differently if it’s in a staging environment. By default the environment is set as production, however webhosts now can declare staging environments and that is automatically picked up by WordPress.  Somewhere I can see this feature being used would be in the case of Analytics Trackers or heatmaps etc.

(29:15) – Plugins and Themes can now updates can now update via a Zip File. There are various plugins that people may have installed in their website but it’s not available in the plugin directory (paid plugins for example). In the past, you would need to access File Manager or access the site via FTP and delete the files and then upload the new plugin.  With the latest version of WordPress 5.5, you can now just re-add the plugin like you would initially install and the system will give an alert with the version numbers and ask if you want to overwrite the files.

As You Can See WordPress 5.5 Has Changed (a lot)

The above is just a little insight as to what has changed in the new version of WordPress. We definitely consider the update a Major Update, and as always, we strongly recommend making a backup before doing any upgrades.

We love the new changes that we’ve seen so far, and are excited to see what WordPress has in store for us in their next release. They’ve already assembled the team for WordPress 5.6 and have a slew of items on their wish list, so we’ll be following that closely.

As always, if you run into any issues, feel free to drop us a note and we can assist.

Join Us Each Week For A New Facebook Live

Every week, Conor & Kimberly have a Facebook Live that is open to everyone. We usually have a topic pre-planned, but we’re always open to new discussions during the broadcast!

If you have a topic that you’d like us to cover, drop us a note and we’ll do our best to get it added to the schedule!

Whether you’ve just started a business and want an SEO-friendly website to go with it, or you’ve been in the game for a while but you’re not ranking very well in Google and you’re thinking your website could be better, you’re in luck! Here at Big Red SEO, a web design and internet marketing company in Omaha, we specialize in web design and search engine optimization, which means that we can build your custom website and populate it with content that gets you noticed by potential customers and search engines. Today we’ll take you through the steps we like to

A collection of top tips/rules you should follow when doing SEO or Search Engine Marketing. 20 top design points webmasters should be aware of. Includes a bonus item which is the foundation for all SEO work.