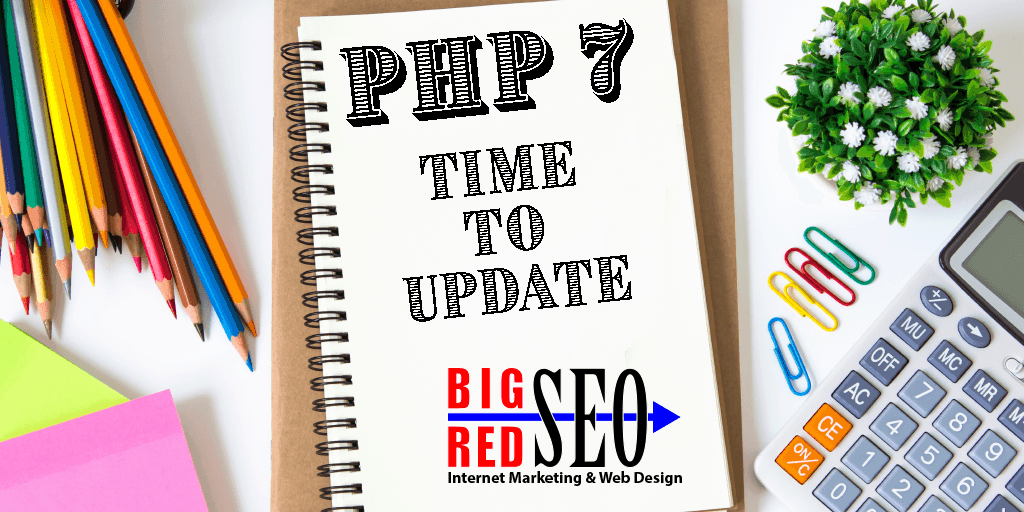 For the past year, WordPress has been pushing users and plugin developers to move to PHP7, and it looks like 2017 will be the year they pretty much require it!

While they haven’t pushed things into a full requirement, they are leaning pretty heavy on it.  Over the next few weeks, you’ll start to see notices in your WordPress Admin Dashboard recommending you to upgrade to the newer version. If your web host doesn’t support it, you could find yourself in a world of hurt in a future WordPress release.

Why Should I Upgrade To PHP 7?

Aside from the fact that it is the latest major branch version of PHP, it’s also a lot faster than the PHP 5 branch. The entire engine has been improved so much to the point that it can process up to two times faster than the PHP 5.x branch.  Faster software processing using fewer server resources ultimately results in a faster website.

If you’re using WordPress, you can rejoice in the fact that the developers of the software have been testing and making sure that their core software is 100% compatible with PHP 7, and from everything we’ve tested, it does appear to be.

Now just because the core of the software is compatible, that doesn’t necessarily mean your theme or your favorite WordPress Plugin has been tested and updated.  This will need to be verified by you or your webmaster.  You can also check the WordPress repository to see what version has been listed by the plugin developer.

There are some downsides to using PHP 7 in that some older PHP code may no longer be compatible. This is something that happens with every upgrade of a Major Branch in any software.  The reason that it’s a 7.0 branch rather than 5.6.13 is that big parts of the code have been rewritten.

Usually, when you upgrade the software, your programs would produce error codes saying that something has deprecated in later versions. This is hidden in the log files of the site most times, but in some rare occasion, it’s displayed in the browser.  Deprecated code generally doesn’t mean the software breaks, but rather a future version may break.

What’s at issue then is custom code, website theme, or plugin that was written for an older version of PHP5 or PHP4 which may not be compatible with PHP7.

What Happened to PHP 6?

The long and the short of it is that PHP 6 was a non-starter, at least in the eyes of the public.  There were a number of developers working on the software, but it never made it to public release.

Essentially, someone got the bright idea to recode parts of PHP to implement Unicode support, but after nearly 5 years of programming, it was deemed too much work and the project was abandoned.

So what ended up happening to PHP 6 is that instead of it being it’s own Major Version release, parts of the code were rolled into a PHP 5.4 branch, and the world, for the most part rejoiced.

Now the issue comes around that there’s a lot of new functionality, new engine rewrites etc, and instead of rebranding it as PHP6 (which previously failed), it was named PHP7 to avoid confusion.

In a cruel twist of fate, the controversial decision to skip Version 6 and Launch 7, created confusion anyway, as people continue to ask, “Where is PHP 6?”

One of the core services that we offer at Big Red SEO is a Website Audit, both from an SEO Audit and from a Web Design Audit. I can’t tell you how many websites I’ve run into over the years that are not only running an outdated piece of software, but they’re grossly outdated.

Earlier this year (2016), we performed a website audit for a client and found that they were using PHP 4.4.9, a version that ceased support from the makers of PHP in August 2008.

We’ve even audited websites for clients hosting with big hosting companies such as GoDaddy, BlueHost and HostGator where they are still using PHP 5.3, a version which expired in August 2014.

It’s pretty sad really, but a lot of the larger web hosting companies appear to be pretty laid back when it comes to the security of their users’ sites. Some of the hosting companies allow the user to choose what version of PHP they want to run on their website, but they never encourage users to upgrade at a later point in time.

Since December 2015, PHP7 was marked with a Stable Release Status, and as such, web hosting companies were encouraged to upgrade servers to the latest version.  As with any upgrade, however, they potentially break old coding styles, so hosting companies generally don’t force users to upgrade.

You will want to open a ticket with your web hosting company to see if they are supporting PHP 7 (or PHP 7.1 which released in December 2016). Some hosts have an easy migration path, others just flat out refuse to help you. If your host does not want to help, it’s time to find a better web hosting company.

Who Do We Use For Web Hosting?

We’ve used a number of places over the years, but we’ve stayed away from the big box style web hosting companies for the simple reason that they give us the feeling that they’re too big to actually care about us.

Today, we work with two hosting companies for the majority of sites we work on.

UPDATE: As of January 2019, we no longer recommend InclusiveHost due to several outages, failure to update clients, lost files, staff closing tickets without responding, and the company disabling their billing/support system during an outage, deleting the company Facebook & Twiter pages and removing LiveChat, Skype and Phone contact.  WE DO NOT RECOMMEND THEM!

To see who we do recommend, check out https://www.bigredseo.com/web-hosting-recommendations/

The second hosting company that we work with frequently is Total Server Solutions.  While they don’t offer Live Chat Support, they do offer enterprise solutions which are critical for large ecommerce websites. We’ve also had the pleasure of working directly with the owners of TSS. They offer ticket based support and phone support for sales calls.

Where Do We Go From Here?

This is really going to be up to you, your timeline, and your webmaster.  For us, we strongly recommend that you make the upgrade sooner rather than later.  Coordinating your schedule with your webmaster can take anywhere from days to weeks or even months depending on your relationship and their workload.

The move of the website to PHP 7 will also depend on how complicated your website is, and what software plugins might be used.  As with any move, we recommend that you first make a website backup and then test the upgrade in a test environment. Once evaluated, then you can repeat the process on the live website.

Do not, under any circumstances, just click the update on your live site.  Should it break your website, you may be spending hours or even days trying to recover things.

Have You Made The Upgrade To PHP 7 Yet?

We’d love to hear about your experience. Have you made the upgrade to PHP 7?  Any problems that you may have faced? Did you need help from your web hosting company?

If you’ve decided against upgrading, is there a specific reason why you are opting not to make the move?

If a business wants to thrive, they need a strong online presence. And the core of any strong online presence is a website. However, as many Omaha businesses discover from their own experiences, not all websites are created equal. If a business has a poor web design, not only can it hold them back, but it can actively hurt them. Specifically, a low quality web design will make a business look unprofessional and cause it to miss out on many potential customers. Since web design problems have immediate consequences, this is an issue that businesses need to address as soon